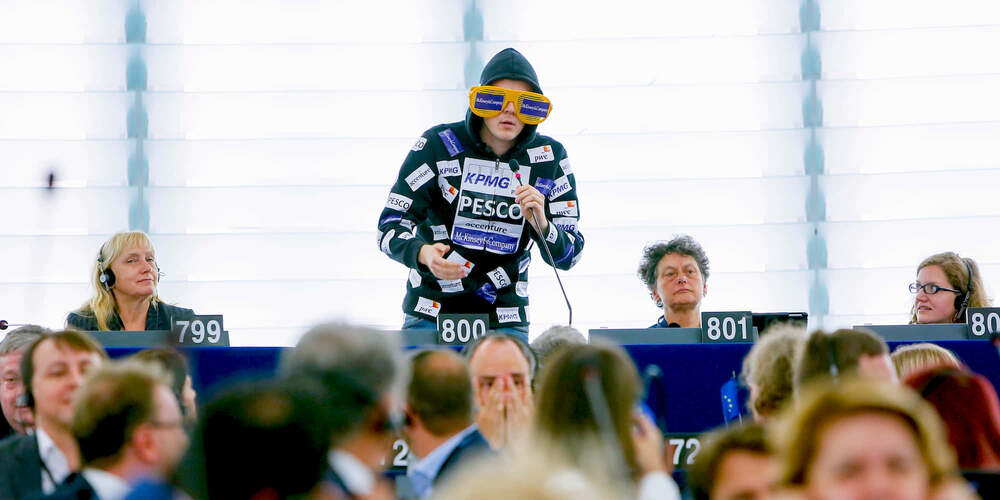 Nico Semsrott has failed his way to the top in his career as demotivational coach. Called the "saddest comedian in the world," he had learned through poetry slams, solo performances and YouTube videos how to make people enthusiastic for depressing topics. And because nothing is more depressing than politicians who do satire, he then decided to go on the counter-attack and do politics as a satirist. In the 2019 European elections, Nico, as Die PARTEI's candidate for Commission President, made his way into the European Parliament. "The EU is in a deep crisis," he declared, "and so am I."

Many voters accuse politicians of making too much money. But their anger usually lacks a factual basis. This is where I step in. Thanks to this overview of the funds at my disposal, you can back up your sense of injustice with exact figures.

Nico receives too many messages. Before writing him, please check whether your question already has been answered below!

How many hoodies does Nico own?

He has lost count, but at least 15. There is a coat-hanger buried beneath black hoodies in a corner of his office. No matter how many he owns though, Nico only wears one: his favorite hoodie.

Does Nico have a girlfriend?

Nico refuses to answer this question and suspects that his team only included it to flatter him. He doubts that anyone would actually want to know this.

He asks himself the same question every day.

How can I support Nico?

At the moment, you can help Nico by supporting his petition 1156/2019. You can do this here (but you first need to create an account, sorry). The petition asks to officially rename the plenary hall in Brussels as "Strasbourg," so the Parliament can stop taking its pointless journeys to France.

Nico and his team are hard at work to create more opportunities for working together.

Why is Nico in politics?

Because democracy and accountability only work when there is an interested public. So far, the EU's brand of unintentional satire has failed to interest the public. Nico is now giving it a try with intentional satire.

Why did the Greens join Nico?

The main motivation was to weaken the fascists within the Identity and Democracy group (ID), to which the Alternative for Germany (AfD) belongs. With Nico on board, the Greens were able to stop the Nazis from becoming the fourth-largest group in the European Parliament. This means that they received fewer speaking rights and committee seats. Unfortunately, Brexit has since allowed the ID group to overtake the Greens.

Another reason regards infrastructure. There are logistical benefits to being able to work with colleagues within the group.

Why does Nico vote the way he does?

It's mostly "monkey see monkey do." Nico follows the votes of his group, the Greens/EFA.

Nico made a conscious decision to do this. He was not elected to deal with the details of legislation, but rather to promote transparency and awareness of what is going on in the EU. This is what he stands for (even when he is laying down).

This is how the votes go: In the European Parliament, they are held in rapid succession, often in ten-second intervals during an uninterrupted one-hour session. And even every non-binding resolution is made up of several pages, on top of which multiple pages of proposed amendments are added.

It is impossible for a single MEP to keep up with it all, let alone to understand fully each issue at hand. The honest answer is that Nico does not know in detail what he is voting on. And he is certain that the same could be said of all other representatives.

It is all so complex and multi-faceted that Nico would need dozens of assistants to examine everything that is up for vote. Fortunately, in the Green/EFA group there are experts for every policy area that deal intensively with certain topics. Without a voting-list prepared and printed out by the political group, nobody would be able to vote correctly, because they all would be too busy trying to read the details.

Nico makes up 1/705th of the Parliament, meaning his vote counts for 0.14 percent of the total. You can spin this however you like, but this is not much power. This is why most of his votes are purely symbolic. His voice, given the current (overwhelmingly neoliberal) majority, is not at all decisive. That's just how it is.

What does Nico think about the following issues?

He is open to all three, and thinks they are worth a try. In general, it is worth trying out everything that has promise and seeing what works.

There is enough money within the EU to experiment with basic income and, if it proves successful, introduce it generally.

What were Nico's main campaign promises?

What is the status of his other campaign promises?

What has Nico accomplished so far?

When is Nico's next performance?

On 1 June 2022, Nico will be in Hamburg for a live Q&A at Polittbüro. Another event is planned for 1 July 2022 in Brussels. The information is available here. Appearances as a demotivational coach on the "heute show" are not allowed during Nico’s mandate, per ZDF rules.

Can Nico come visit us? Does Nico accept invitations?

Yes, if you can convince your school/teachers to invite him for a Q&A session, Nico will be happy to come in person (as long as his schedule allows). Click here for more info. Otherwise, Nico's constituency is the internet and he regularly visits it via social media.

Can Nico draw attention to something for me?

Nico does not wish to be lobbied. He knows very well that there are thousands of issues that receive too little attention. But Nico and his team decide for themselves which topics to deal with. When it makes sense, they will ask for input from Nico’s followers or the general public. And when they choose a topic and need help understanding it better, they will approach the experts they deem fit.

Where can I find Nico merchandise?

Nowhere, currently. Producing and selling merch proved to be overwhelming, and Nico is overwhelmed by too many things already, so he decided to stop making more for now. If you are curious about what he produced in the past, or if you want to see to which organisations he donated the proceeds, see here.

How can I get an autograph of Nico?

Can I visit Nico?

Yes, visits are currently possible again. Here you'll find everything you need to know. Groups of at least 10 people can get information here. Individual visitors should have a look here.

Why is the plenary hall always empty?

Surprisingly, it’s because the MEPs are busy working. It is a good thing that the plenary hall is empty. This is because everything happens at once during the plenary weeks: MEPs come to the plenary hall to pronounce things, while the actual work takes place elsewhere in working groups, committees and political group meetings.

This means that while a few dozen people sit in the plenary hall to speak about the subjects that they especially care about, hundreds of other MEPs are sitting in meetings somewhere else.

There is one exception. The plenary hall is full during the votes which usually take place once a day during plenary weeks.

From a PR perspective, it is extremely dumb that the Parliament shows the empty plenary hall without explaining why no one is there.

How often is Nico at the Parliament?

For the first time in his life, Nico has a normal five-day work-week. He goes every day to the Parliament, regardless of whether it is a committee week in Brussels, a plenary week in Strasbourg, or a "green week" when the other MEPs visit their constituencies (or play hooky). During Corona-time, Nico, like most other Members of the European Parliament, works from home and votes remotely.

When is Nico in Strasbourg and when is he in Brussels?

The European Parliament has an ugly and confusing calendar. To help you make sense of it: Four red days in a row indicate a plenary week in Strasbourg. Green weeks mean that MEPs are visiting their constituencies. White means the Parliament is empty. The rest takes place in Brussels.

How many employees does Nico have?

Everyone wants something from Nico. Some want videos, some want autographs, some have questions about his political commitment and some even want to marry him. How can one person manage all this alone? Therefore, Nico has the following employees to keep him going: a project manager and an author.

With other MEPs it's usually a little different. There is typically one office manager and two people who deal with committee work, plus staff in the local constituency office.

Can Nico do something for us?

Probably not. Even though Nico is a demotivational coach, he secretly admires the work being done by so many idealistic young people and would like very much to support it (he means this without any irony: You're all great, keep it up!). But he just doesn't have the energy. Nico is often flooded with requests and is simply overwhelmed by it all. Unfortunately, he also lacks the energy to fulfill individual autograph requests, send out greeting messages and meet with visitor groups. Nico cares about reaching as many people as possible, even if only in a modest way. Hm, does this make sense? Let's put this another way: If Nico had the choice to either reach 100,000 people virtually or a visitor group of 20 more intensely, he would rather invest his time in the video with 100,000 viewers. He hopes you understand.

Can I get in touch with Nico personally?

No. As mentioned, Nico is simply in over his head. He can only be reached through his office address above. Sometimes his team will respond.

Can I do an internship in Nico's office?

Sorry, currently there aren't any possibilities to do internships. Here's more information about jobs at Nico's office.

How much does Nico earn?

A lot. Or at least enough to require a sophisticated website to add it all up.

In case you couldn't find an answer in the FAQ and still would like to write us a message, please let us know the reason why. This helps us to be able to process your message as quickly as possible.

If you are dealing with depression, or fear that you might be, the most important thing is that you let other people in on your thoughts. Nico and his team are not trained specialists. However, they do want to ensure that your message does not go unheard. This is why they have put together a page with emergency contacts and ask you to take a look at the information provided.

In case of press-related requests, please get in contact with Nico's press officer:

Public domain photos are available on the EP's Multimedia Center.